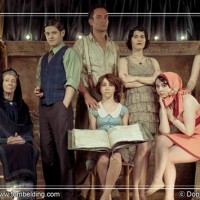 Bringing the 1930’s to life with visual splendour, feat. Iwan Rheon of Game of Thrones — a.k.a Ramsay Snow; here’s a taste of Charlotte’s Song, a first feature film for producer duo Jessica Leigh Clark-Bojin and Lindsey Mann of Done Four Productions who did an amazing job putting together this unique period piece film. It was an action-packed journey creating director Nicholas Humphries‘ enchanting world with DOP Naim Sutherland — who is no-stranger to dark visual storytelling.  There promises to be much more to come from this fun film.

A young girl with a special gift comes of age during one of the most desolate periods in American history in this dark fantasy inspired by Hans Christian Andersen’s “The Little Mermaid.

Think “Pan’s Labyrinth” meets “Carnivale” – gritty human drama with a supernatural twist, situated in the 1930s Oklahoma Dust Bowl. Inspired by Hans Christian Andersen’s “The Little Mermaid”, “Charlotte’s Song” tells the story of Charlotte, a young girl coming of age in the midst of one of the most desolate and desperate periods in American history. The untimely death of her mother triggers a downward spiral for her father, five sisters and their family-run song and dance act. Help comes from an unlikely source when a gangster named Randall offers to pay off their debt in exchange for making some unsavoury changes to the family business. Matters are complicated when it is discovered that Charlotte, like her mother before her, is in fact a mermaid capable of controlling humans with her voice. What follows is a sophisticated magical turf war in which antagonists from many camps seek to take advantage of Charlotte’s power.