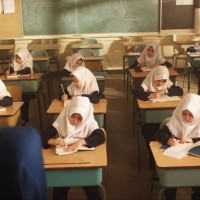 From time to time we get an opportunity to work on an independent film with a great story which transcends the technical, monetary, and logistical limitations of the film

Ellie Fox‘s first feature film, “Under the Apple Box“, has taken several years following principal photography to re-finance and complete. She’s slowly but surely getting film festival and media attention after much perseverence, thanks to her compelling story. This is good for the local Vancouver cinema scene, and what’s better — she’s got another script up her sleeve.

Here’s a roundup of Under the Apple Box’s latest announcements:

“Escaping from a world where women are undervalued and often in peril, Leila ultimately finds that her successful new life comes at an unbearable cost.”

“From a small town in Iran, a young Leila rises up to teach her world about acceptance and rekindles a lost love along the way.”

At a traditional “Rozeh”, or women’s gathering, in Iran in 1983, nine year old Leila (Jane Lowery) has discovered a talent for taking pictures. Her revealing glimpses of the hidden female mysteries find a ready market with local photographer, Amir, who sells Leila’s photos and holds private screenings to show her forbidden pictures to eager boys.

Orphaned as an infant, Leila was left in a basket under an apple box in a grocery store, to be raised by the loving Nanah (Elaine Rathey), the shopkeeper and a revered local storyteller. Leila’s main goal is to save up enough money for Nanah’s knee operation.

As a teenager, Leila (Lorena Griffiths) meets a rich Australian boy named Danny (Mike Clemente). They fall in love and Danny visits her every summer. However, the Revolution forces Danny and his family to leave Iran, leaving Leila devastated. Life takes a shattering turn when Leila’s step-brother attempts to rape her but is caught in the act by Nanah, who inadvertently kills him. The subsequent trial is a foregone conclusion as both Leila and Nanah are sentenced to death. They manage to raise enough money for Leila to flee the country but tragically, she is forced to leave her beloved Naneh behind.

Having escaped to Vancouver, Canada, the adult Leila (Tammy Gillis) becomes a very successful photographer and writer but is forever haunted by her dark past. One day she hears some disturbing news and her lost love Danny (Gilles Tanguay) comes to find her, forcing her to revisit her tragic past and to come to terms with its legacy at last.