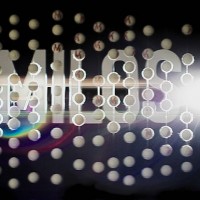 In this TV spot for New Balance, TALCO goes face to face with Canadian olympic tennis star Milos Raonic. We teamed up with a New York based company hscusa.tv to bring Milos to life in full HD, high speed, glory.

Filmed at frame rates upwards of 700 FPS using a Phantom HD camera we required special high frequency HMI ballasts that have only become available within the last few years.

Paramount Production Support in Vancouver helped us obtain state of the art Power Gems 300hz capable electronic ballasts. This allowed us to use two 12k PAR and one 4k Par to shoot this high speed photography. We would not have been able to do this a few years ago using these types of luminaries.

In the following picture you can see us setting up for the shoot with two 12k Par, an Ultra Bounce 12×12 frame, and some Power Gems ballasts. All HMI were using 300hz capable electronic ballasts and were flicker free at 700-1000 FPS high speeds for the Phantom camera. A few years ago HMI would have been out of the question for this type of photography. We would have had to use T12, 20k Tungsten Fresnels, or Maxi Brutes to get the amount of light we needed without flicker.

For those who are not familiar with high speed photography, the photo frame is exposed so fast that it can detect the cooling down of a tungsten filament between cycles as it becomes energized on and off rapidly reacting to the sine-wave pattern of AC – alternating current (60 hz North America). Larger filaments – generally 5k and up — tend to be safer because they are so large they burn hot, so the cool down effect of the filament is not as perceivable. However, tungsten are large — we considered 20k Fresnel, T12’s, and Maxi Brutes — hot, and the light was too warm in color temperature for our commercial shoot. We wanted to be far away and unobtrusive with the lights. They needed to be cooler, and able to focus tighter beams. We considered Luminsys Softsun strobe lights by the makers of Lightning Strike. But they are an expensive specialty item and require special consideration to power. They also sometimes have issues of overheating we have found. Instead we choose a workhorse staple in the film industry: HMI PARS.

HMI discharge lights operate differently then Tungsten. They use a transformer (ballast) which features a complex system of capacitors, coils, and circuits to build up high voltage electricity which arcs through a vacuum chamber of metal. The metal ignites into gas/vapour, then the voltage lowers and stabilizes to pulse through the vapour, causing it to emit light.

In its most basic form — the heavy “boat anchor” magnetic ballast — the electricity passing through the vapour changes polarity 120 times per second at North American 60 hz frequency. With each polarity change the light momentarily strobes. This happens so fast that the human eye cannot detect it very well but the camera certainly can unless it is synchronized to a compatible shutter angle.

Originally magnetic ballasts required cameras to be set to “hmi safe” speeds (frame rates which divide evenly into 120 (60/40/30/20fps) or the camera would catch an inconsistent amount of pulses per frame, creating a rolling strobe effect. Then electronic ballasts came out and offered Flicker Free, which was basically an electronic switching that chopped the sine-wave pattern into a tighter “square-wave” pattern making each individual pulse less discernible. This minimized the rolling strobe effect and allowed some irregular shutter rates, but the max speed possible to shoot at was still limited by the output frequency of the electronic drivers.

HD Cameras have gotten faster as well. The technicalities of capturing, and then recording the millions of pixels involved in one thousand high definition pictures per second are astounding. The HMI technology has steadily kept up the pace. First electronic ballasts offered 100hz output cycles providing more pulses per second then at 60hz. Now Power Gems offers 300hz and Arri has 1000hz capabilities. The cameras can go upwards of 2500 fps theoretically pushing Arri’s 1000 hz to the test.

Anyway, in our experience Power Gems lived up to their claim of flicker free up to 1000 fps using their 300hz output ballasts. These power gems ballasts are widely available in rental houses although some inventory may not have 300hz capability (although they can be sent back to Power Gems for an upgrade card to retrofit them if they don’t have the feature stock).  They may not be as fast as Arri’s 1000 hz ballasts, but for us and up to 1000 fps they were adequate and most importantly, readily available.

Here’s a little spin-off second portion of our shoot which was used for Biotherm Canada called “Ace Your Serve”.

This video was used as a comic promotion it was supposed to feel like candid television.