Home / 2012 / November / Behind the Scenes on Midnight Rider 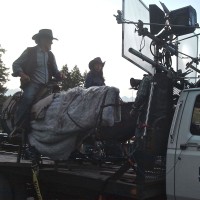 Midnight Rider, a modern day horse film, starring singer/songwriter legend Kris Kristofferson and Jodelle Ferland. We worked with director Bill Dear and cinematographer Pieter Stathis who together set out to create a picturesque, and predominantly outdoor film, with horses and landscapes. The movie was produced on a MOW budget by The Nassar Group – NGN. We had a crew of 4 guys and a generator operator. Much of our days involved logistics of setting up and shuttling equipment over large distances and working closely with animals and trainers.

A big part of the film was the horse race at the end.

In order to create the racing sequences Brant FX built a horse gimble rig on the bed of a flat deck truck. We built everything around it, scaffold pipe railing, generator, and HMI rigged for each rider with a diffusion frame. The horse gimble was like a giant spring mounted toy from a playground. Brant FX took it a step further by mounting the center horse on dolly track and attaching an air powered hydraulic piston to propel the horse forward or backward during the take. It made it appear as if one horse was overtaking the other when filmed from the side. Getting the camera position to the side was a difficult task as well because the flat deck was only 8 feet wide. With the help of the FX team we secured a forklift man-cage cantalevered off the side. We mounted our bazooka base and pedestal to the cage, then we strapped in Pieter Stathis who operated his steady cam using a garfield mount.

Due to the large distances and the MOW pace of shooting, we gave up a hydraulic pee-wee dolly in favour of our lightweight panther dolly which we could transport more easily through the fields. Pieter wanted lots of motion in his shots to accentuate the large horizons and scenic frames, we didn’t have a lot of time to setup each shot. We mounted a porta-jib to the panther dolly in order to provide a mobile base that could be repositioned easier. We even mounted two pieces of our GI Track on 4×4 beams so we could march into set, drop the beams, and level it quickly without thinking twice. Speed was the name of the game.

When available we used gators to shuttle our equipment.

Here’s some video clips behind the scenes: